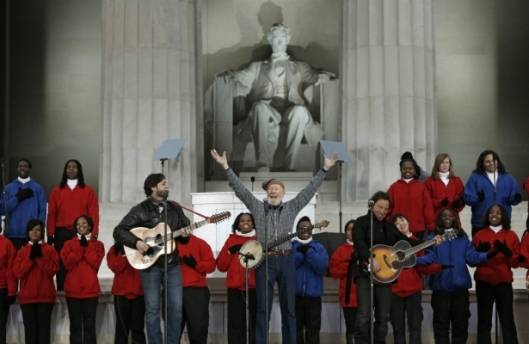 One of the most iconic, brave, and influential Americans died on Monday, January 27th, 2014, at the age of 94.

Pete Seeger was the voice of the Viet Nam war protests, the unions, the disenfranchised, the poor.  His songs, “We Will Overcome,”  “If I Had a Hammer,” “Turn, Turn, Turn,” and “Where Have All the Flowers Gone?” are the American soundtrack of most of the last century.

As The Nation said about him:

“Seeger was a much-acclaimed and innovative guitarist and banjoist, a globe-trotting song collector, and the author of many songbooks and musical how-to manuals. In addition to being a World War II veteran, he was on the front lines of every key progressive crusade during his lifetime—labor unions and migrant workers in the 1930s and 1940s, the banning of nuclear weapons and opposition to the Cold War in the 1950s, civil rights and the anti–Vietnam War movement in the 1960s, environmental responsibility and opposition to South African apartheid in the 1970s, and, always, human rights throughout the world.”

As Pete Seeger himself said at the hearings of the House Un-American Activities Committee of the early 1950s, when the lives of so many talented artists, writers, directors, actors, politicians, and gay people were ruined by the Communist red-baiting of Senator Joe McCarthy:

With thanks to Diana Spiegel, Town Meeting Member of Brookline, Massachusetts, who brought these links to my attention, here is more information on Pete Seeger:

The Nation magazine: “Pete Seeger brought the world together”

8 songs to remember Pete by
http://theweek.com/article/index/255630/8-songs-to-remember-pete-seeger-by

Now on PBS: “Pete Seeger, The Power of Song”

Pete Seeger’s testimony before HUAC at the hearings held by Senator Joe McCarthy (known as “The McCarthy Hearings”)
http://www.dailykos.com/story/2014/01/28/1273074/-Testimony-of-Pete-Seeger-before-the-House-Un-American-Activities-Committee-August-18-1955#
Nov 14, 2013: The last show of his life, a benefit for WBAI NYC
http://www.youtube.com/watch?v=iOzEGONBQxc
The Colbert Report, August 6, 2012
https://showyou.com/v/h-B4DrlbzmSg2LFr4X/pete-seeger-quite-early-morning

Pete, thanks for the 94 years of songs and political action that you gave us.  America is a much better, kinder, and more compassionate country because of you.