I was out for 3 hours today on Beacon Street, watching the Boston Marathon which passes 1/2 mile from my house.

We stood on the street  24 miles into the race, 2 miles from the finish line, as  people from all around the world ran the oldest marathon in America.  This took place in Boston, one of the US’s most historic and safest cities.  It was Patriot’s Day, cherished by people from Massachusetts which celebrates the colonials first taking on the Redcoats on April 19, 1775 and which signalled the start of the American Revolution.

The weather was perfect–in the 50s, not too hot for the runners, and sunny.  The mood of the crowd was upbeat as we cheered on people from Kenya, Ethiopia, the UK, Nebraska, Japan and probably every state in the Union and country in the world;  runners on foot and in wheelchairs,  and members of the armed forces in camouflage carrying 100-lb packs.

Many of the people running in the Marathon were raising money for a charity–a children’s hospital, a cancer center–and there was no political agenda to anything today.  There was only the joy of putting one foot in front of another and doing the best that you could in order to say that you ran and finished the Boston Marathon and perhaps raised money for a good cause.

My daughter Meg in red, and her friends Mame-Diarra and Julia. 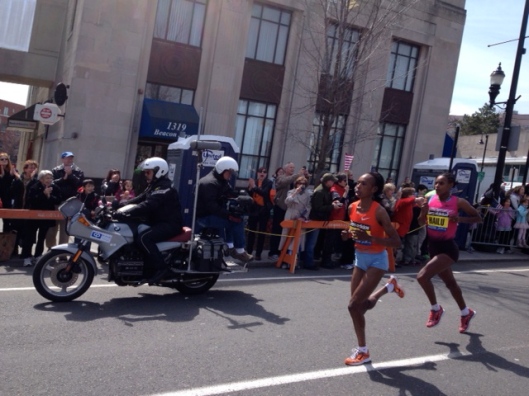 The first women runners at mile 24.

The first men runners at mile 24.

More of the Marathon runners.

And all I could think of was the other innocent victims of violence, in London during the IRA bombings and the terrorist attack on 7/7/2005, in Afghanistan, Iraq, Israel, Palestine, Syria, India, Indonesia, Somalia, and too many places around the world.  And in the US, the Omaha City bombing on 4/19/1995;  the World Trade Center attack in New York City on 9/11/2001; and the slaughter of children in Newtown, Connecticut, on 12/14/2012.  All massacres of innocents.

2 thoughts on “The Boston (Marathon) Massacre: Why would anyone do this?”